VALENTINES BUNDLE - BUY AN IQ2* AND GET
MIQRO EXPLORERS COLLECTION(RUST) FOR 50% OFF!

Over time, the American public has shown itself to be very accepting to new ideas and changes in existing laws and mores. A most recent example of this is an event that showed how adaptable to change the public truly can be on legalizing same-sex marriage.

This positive change followed a trend that many other changes in societal views have in the past. Massachusetts was the first state to legalize gay marriage in 2004. In this respect, they were the innovators concerning the changing overall view.

Innovators are often simply ahead of the curve and soon others follow, once grassroots efforts or a major event, i.e. a court ruling, build upon the existing momentum.

Remember, by the time the U.S. Supreme Court legalized gay marriage, 28 of the 36 states who legalized it prior had done so during a two year window between 2013 and 2015. Such changes in overall societal views often occur rapidly and this has been seen before in things that you consider quite common today such as interracial marriage, women's right to vote, and now marijuana legalization. There are  groundbreaking studies out there that backs up the benefits of cannabis when used properly.

Current support for legalized marijuana is at the highest level ever recorded as per research from Pew. Their results ( seen here) show that, overall, 54 percent of American adults surveyed favored marijuana legalization.

Across age groups, if you’re younger, odds are that you greatly favor legalization. In the study, adults between the ages of 18 and 29 supported legalization at a rate of 70 percent.

Notably,those aged between 30 and 49 favored it at a rate of 56 percent and those aged between 50 and 64 favored it at a comparable rate of 55 percent. Only the oldest surveyed aged group of 65 and older did not favor legalization, with only 32 percent approving. While there is a certain amount of “generation gap” seen in the results, overall trends lean toward approval across a wide section of the population.

Also notable is of all people surveyed there was a majority agreement across the board that small amounts of marijuana should not lead to jail time if marijuana remains an illegal substance. Overall 76 percent said there should be no jail time for possession of a small amount of marijuana.

One of the key facts you should take from the above report is the changing view of marijuana safety. Much of the fears of marijuana's danger were not based on scientific facts, but on overall fears of drug use in general – much of which, as it relates to marijuana, was overblown.

Why Did People Change Their Minds?

Greater acceptance of marijuana use and calls for legalization are certainly positive things. Often, the first question that comes to mind is; Where did this need for change come from?

For many decades, marijuana use was stigmatized. While films such as 1930s-era Reefer Madness are looked upon today as being comedic, film and literature expressing negative views (if not so extreme) were commonplace for generations. So what started the change in public perspective?

Much of this comes from personal experience and overall pop culture. Currently, 49 percent of Americans have used marijuana in their lifetime. It is by far the most used “illicit” drug, giving a good majority of people personal experience with it, if not by use, then by association.

As it relates to pop culture, marijuana is not presented in modern popular media as a horribly destructive substance. In fact, it is often presented as commonplace in certain cultural subgroups or events/gatherings and viewed overall in a nonjudgmental way. Movies and television often use marijuana in comedic and lighthearted ways, further removing stigmatization. Based on  Pew Research Center, 68% of Millennials show support for the plant to get legalized. 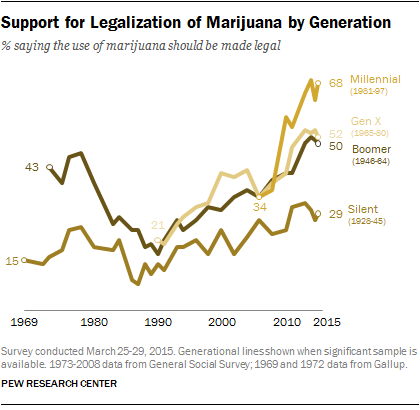 Scientific study also played a part in changing the public’s viewpoint. Much of the anti-marijuana sentiment was based on societal mores and not scientific facts. As marijuana was studied as a medicinal drug, the benefits it offers patients suffering from certain medical conditions became better known to the public at large.

With marijuana now scientifically proven to have positive medical benefits, this further improved its image in the public mind.

The above statistics are quite positive and, taken from an historical context, point to a larger trend of society changing its views on marijuana. While an increasingly positive viewpoint is no small thing, the legalization process is still very much in its early phase.

For medical purposes, marijuana is already legal in 24 states. However, as a recreation drug, it is currently only legal in four states and one district these being Colorado, Washington, Oregon, Alaska, and Washington D.C.

For the 2016 voting year, keep your eyes on the following states: California, Nevada, Maine, Arizona, and Massachusetts are all voting on full legalization.

As marijuana use for medical and recreational purposes continues to gain in public approval, there will be a continued trend in state-level legalizations. As time goes on, the odds for federal decriminalization and federal legalization will also increase.

Not only will this be approved of by a majority of citizens, but there will also be gains in employment, taxes, and product innovation as a growing industry expands to a larger market and customer base.

One such area of growth is in marijuana vape. Vaping is a very innovative industry with vaping products being used for flavored juices and marijuana vape.

We at DaVinci look forward to the changing views and laws in American society that lead to professional opportunities and greater personal choice. We're definitely staying tuned.